“Performing everyday to hit above the objective of the mark”, has been the authentic mantra of the Business Development team that urges their potentiality and role of acting as “Wolves of Lazer Street” to reach the predicted revenue destination. In this report, we reveal the strategies, confronts and sales methodologies that propelled the business development team in acquiring 4x revenue growth of CONTUS. An intelligible game plan narrated by the Global Sales Head of CONTUS – Arun Palaniappan and his team who has been in the battle of triggering CONTUS’ global revenue.

Fortunately, this achievement had to happen in the 10th year of the CONTUS anniversary. Their accomplishment had been an additional celebration along with CONTUS’ decade of the journey in the IT industry. They processed certain strategies in order to revamp the revenue growth 4x times.

To make this scenario much explicable, we had a talk with Arun Palaniappan to get a better explanation on this journey of great revenue achievement and the strategies put a way to achieve this.

So, Where did you start and What was your actual plan?

Well! The journey was really incredible and we were pushed to tackle many solid tasks. This was initially started in the recent years where online reputation was transforming the major parts in the industry which was gradually striking the sales. We had been in the development of conventional solutions that really harden our sales team to acquire major projects. We had great confidence in achieving greater percentage in the revenue map of CONTUS.

To handle this crisis, we were urged to adopt new strategies to trounce against the crisis in the proposal approaches.

Then, What are the Strategies you made to cope up with this major crisis?

Later, after the complex tussles, we approached all the teams of CONTUS to forge some world-class solutions such as CONTUS Vplay, CONTUS Fly, CONTUS Dart, CONTUS Bot and Apptha. With the utter support of Development team, Support team, Digital Marketing team and all other teams, we were able to achieve inbound leads that gradually increased the revenue into 2x times of the actual growth.

“Every product developed at CONTUS nearly had incredible welcome among the global customers. This actually improved CONTUS client base and raised a way to reach potential customers from more than 40+ countries.”

Were there any solid challenges your team was pushed to face?

Can you tell us the major turning point that assisted your team to deliver this growth?

Absolutely, This was an interesting phase for us. The transformation of CONTUS technology solutions into IoT and Augmented Reality steer to acquire the client base with a list of some amazing automobile industries (Daimler, Mahindra, JCB and Bharat Benz) which has been the treasure that reaps progressive customer base.

These technologies development have been the vital trackway that helped to procure constant projects that heightens the CONTUS’ revenue map into 4x times.

Where do you see CONTUS’ revenue growth in the next decade?

I think from where we are now, there is a lot to conclude in CONTUS’ growth. Being a Sales Head, I see a big picture of CONTUS’ growth resembles as a robust colossus in the world tech companies. As of now, CONTUS has been positioned as the leading top-rated technology development company when it comes to IoT (Internet of Things) and AI (Artificial Intelligence).

What have you learned from this journey of success and what piece of advice you would like to add for the emerging aspirants in sales?

At CONTUS, We build a scalable sales team and urges them to focus on the pipeline at the very beginning and end of the month to execute the game plan for the best outcome. Being the head of the Global Sales team at CONTUS, I handle a bunch of experts, I really advise them to understand and improve the accurate predictability to find the target customers for every given month. 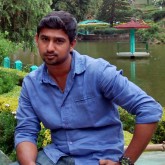 Masilamani Murugan leads the Digital Marketing team at CONTUS. He is interested in strategic planning for digital marketing initiatives. He loves to be fit and is a workout freak.